Students made board games dealing with some aspect of Civil War Baltimore.  The three games were: 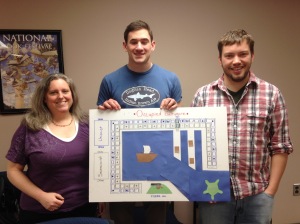 Occupied Baltimore, by Matt Brubaker, Susan Philpott, and Eric Surkovich. Unionists and Secessionists try to make it from President Street to Federal Hill.  But watch out—you might get trapped in Fort McHenry.  And it’s easier to get out if you support the Union, just like in the 1860s!

Battle for the Capital, by Mike Bealefeld, David Jackson, Natasha Najmi, and Aharon Szajowitz. Union and Confederate troops race towards Washington, DC during the spring and summer of 1864.  Everyone’s favorite feature was the Combat Zone, where your fate could be determined by your troop strength.

Escape to Freedom, by Orah Afrah, Jacob Bensen, Conor Donnan, and Talbot Mayo.  Runaway slaves try to make their way across Maryland to the safety of Pennsylvania, facing obstacles along the way.  But even after you cross the border, you still might not be free. 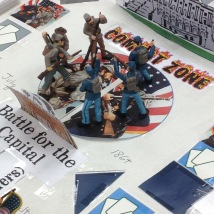